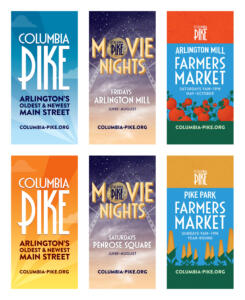 The Columbia Pike Revitalization Organization (CPRO) is proud to announce the installation of 70 place-making banners on Columbia Pike. The project is intended to visually unify the four-mile stretch of Columbia Pike from the Sheraton Pentagon City on the east end to the Western Boundary Marker at Jefferson Street. “The Pike,” rich in history and diversity, is the main East/West transportation thoroughfare of South Arlington, carrying thousands of commuters daily to jobs in Arlington County and Washington, DC.

Phase I of the project includes the first 70 banners installed on light poles from the Sheraton to the Arlington Mill Community Center. Upon completion of the Columbia Pike Multi-Modal Project, Phase II banners will be installed in the blocks between S. Dinwiddie and S. Jefferson Streets, to include the streetscape around Orr Partners’ new ‘Centro’ development.

“This four-mile stretch of “The Pike” represents Arlington’s most diverse community with nearly 72,000 residents, roughly 38 percent of Arlington County’s entire population,” said CPRO Board president John V. Snyder, a long-time resident of the Douglas Park neighborhood. “The Pike represents an opportunity for place-making, for celebration, and for economic development. And Columbia Pike’s ten neighborhoods are also immediately adjacent to Crystal City, the newly-announced headquarters for Amazon.”

Funded by grants from Arlington County, The Washington Forrest Foundation, and the Virginia Main Street Affiliate Program, the Pike Banner project was a year in the making, created as a place-making initiative at the directive of the Arlington County Board in April 2017. It is intended to highlight the major development areas where ongoing Pike events take place: South Barton Street, Walter Reed Drive, Glebe Road, and Dinwiddie Street. Movie Nights and a new Farmers Market at Arlington Mill, another Farmers Market at Pike Park, and Movies at Penrose Square activate the public spaces every week, contributing to the vibrancy of this unique community.

The warm and optimistic blue and orange banners were designed by CPRO’s long-time graphic design partner Winking Fish, who have branded and created visual identities for many other Columbia Pike initiatives, including the Blues Festival, Fall Fest, the Farmers Markets, and Movie Nights. The banners provide a visual consistency on the Pike corridor, brightening and unifying Arlington’s “Oldest and Newest Main Street.”